If a kid is in hospital under your care for a year you get to know him well! I got to know young Abraham very well. I did a number of operations on him, and my wife brought him and his father to Australia for some very delicate surgery, which we couldn’t do there. A church here in Australia paid the airfares and an ex-Ethiopian Australian gave them a house to live in, while in Australia. Two colleagues of mine did surgery on him. They did it free and paid the hospital bill as well.

He was a little boy; he didn’t go to school; he played on the roadside. He was knocked over by a car, fell under a cotton picking machine and was mangled from his lower abdomen down to his knees. His father stayed with him all the time he was in hospital. We saw the mother and rest of the family occasionally.

We pressed on and eventually when all the skin defects were covered he was brought to Australia. His urethra and his anus were repaired by the Australian surgeons mentioned above, and he came back to our hospital. Eventually we closed his colostomy and the supra-pubic catheter was removed. Gradually he regained full control of both toilet functions. Now he is a normal boy.

With some help from friends we started him in school in his home area and the last time I saw him he was in grade 3. He’s a great kid.

I remember with considerable emotion the first smile we got, and the first time I got him to stand up! Below….Not a nice picture of the initial injury, but he was a real live kid! 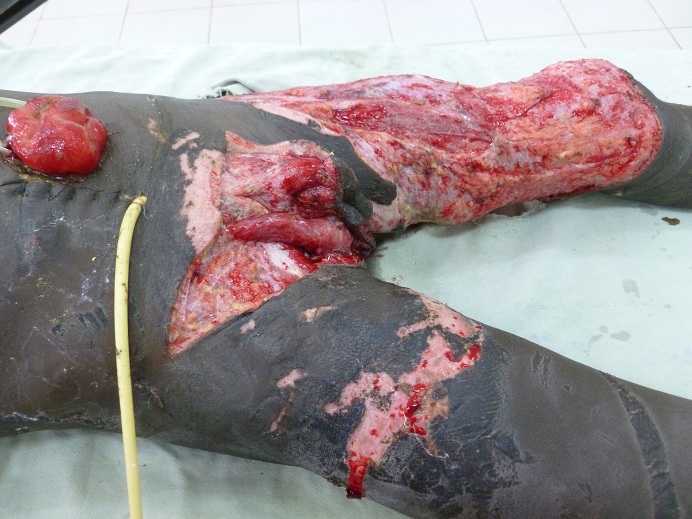 An old man with little time, simultaneously, a lot of time, and lots to say - with opinions, born of life's lessons, on many subjects. View all posts by Heated Stew

This site uses Akismet to reduce spam. Learn how your comment data is processed.